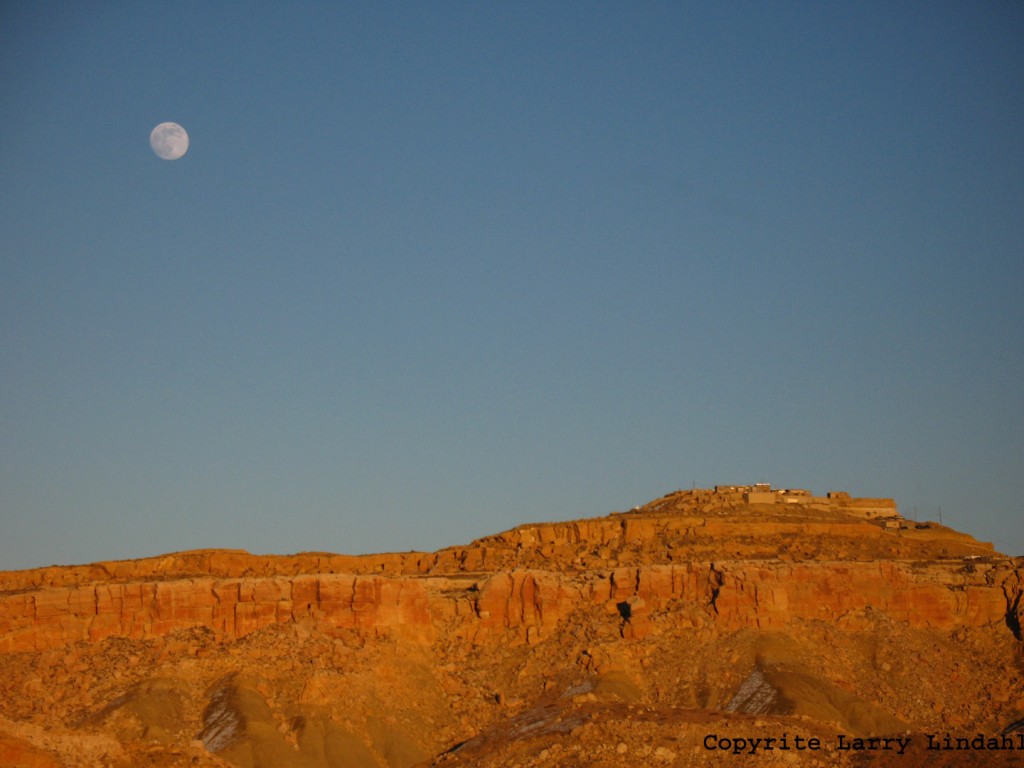 Standing in the crisp, cold air I looked out at the ancient village of Walpi on the tip of First Mesa.

The dwellings melded seamlessly into the stone supporting them as the ancient village held the edge like an eagle with strong talons.

I heard in my head “No Photos” and took in the silhouetted shapes of the pueblo dwellings, continuously occupied for the last one-thousand years. Tonight was Winter Solstice and the sun would set soon.

I knew I couldn’t take a photograph. The Hopi tell visitors in sign after sign—No Photography. So, I looked with eyes only, intent on being present to each moment, aware I could not rely on my camera to save the subtle memories for later.

Sun-baked snow, frozen into an icing both delicate and stubborn, hugged the mesa. Cliffs dropped dangerously into open space on both sides. The mountain known to us as the San Francisco Peaks anchored the horizon in the southeast. The sun drew slowly toward the enormous snow-covered mountain reflecting in a pearlescent glow. The wide-shouldered volcano is sacred to the tribes of Northern Arizona, and especially to the inhabitants of the Hopi mesas.

Firm stood the stone and adobe village against the rich indigo blue sky. To the east hovered the round and bright rising moon. To the west sank the orange sun into the mountain’s southern slope. Touched by the last light of the day, the snow held warm colors on its cold and icy crust. Orange against blue. Amber with soft violet. Pale pink, and then gray.

This meeting of the end and beginning marks the shortest day meeting the longest night. In the moment when the sun flashed out, to hide until the first sunrise of lengthening days, the light began draining from the sky. The darkness was lifted when the sun’s fiery colors let go and the moon began to hold the night.

Earlier in the day, Hopi friend and guide Gary Tso had taken a small group of us to see prehistoric rock art. The petroglyphs were carved high in a crescent-shaped cliff forty miles from the nearest village. The place is called Dawaki. Dawa is sun. Dawaki is House of the Sun.

Surrounded by mysterious ancient markings he pointed to petroglyphs hiding in shadows and carved centuries ago by his tribal people. Concentric circles intercepted beams of sunlight on this day. Ancient solar calendars.

And then he talked of Hopi life. He talked of the influences that hold a community together and the ones that cause it to fall into excessive individualism. The new influences often rob the community of life. And with that the Hopi language may creep toward extinction falling prey to our modern homogenization of cultures.

Life is hard on the Hopi mesas. But from that difficulty comes humility, said Gary. And this has taught them the simple lessons of survival.

On our way back, from Dawaki to the main highway, we caught sight of a deer by the road. The buck, holding its rack high, crossed with ease before bounding over a fence, and was gone.

The day on the Hopi mesas spoke to me of the continuum of life. The art forms of pottery, jewelry, and Kachina carvings always go back to their connection to the whole of life. The seasons. The weather. The water, sun and corn. A reverence of attention permeates it all.

At the end of the day, driving slowly through the tiny village of Sichomovi heading to the sunset view of Walpi, I captured the memories of the day. Kids playing catch with a spongy foam football, smiling and happy. Teenagers clustered in groups dressed in clothes similar to any rural setting, trying to fit in, stand out, and be cool. Mothers cooked dinner in warmly lit kitchens their weathered faces showing in the dusty windows. A pair of young men unloaded a heavy sofa chair through a doorway too narrow for modern comforts. Smoke trailed out of tin chimneys into the cold night air. And friendly dogs wandered and played, curious about it all.

Stopping the car near a hand-painted sign forbidding passage to Walpi, I shut down the engine, and a blanket of silence surrounded me. From this boundary of entering their world any deeper, I walked to the mesa edge to watch the solstice sunset. The intriguing and intricate silhouette of ancient Walpi stood quietly at the end of the mesa.

I slowly began to appreciate the intent behind the photo restriction. Here on the mesas of the Hopi, things are not to be had easily. Pressing the camera shutter button in order to take something home is too easy. To let the mind and soul absorb the world of Hopi strengthens the understanding of simplicity and humility. What visitors take home depends on their willingness to savor this way of life. Hopi art for sale. No Pictures.