My Trip to Tewa, by Greg Ruland 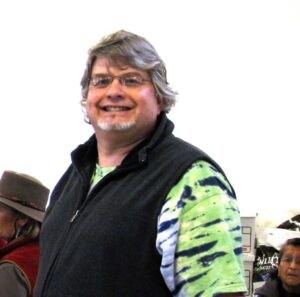 My friends Randy and Milton Crewse inspire by example. For them, performing good deeds is a lifestyle. Also, as a recruiting tool, they frequently wear tie-dye T shirts that knock your eyes out. Try as you might, it’s really hard to resist their enthusiastic altruism.
So it was that my partner, Zach, and I learned about Randy’s annual Tewa Holiday Project and decided to take part. Like any invasion of a third world country, a tremendous amount of planning and coordination is required. Randy and Milton, officers in an army of volunteers, pull most of the strings, with a supporting cast of patient laborers who just want to help. 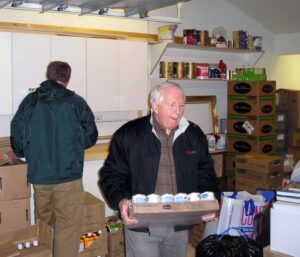 The heavy work was done by the time I showed up Friday afternoon to stuff my 2001 Buick Century Ltd. with boxes and bags of food and clothing. The maneuver was so efficient it took less than five minutes to load. Despite clear instructions, I got lost in the wrong neighborhood and showed up 30 minutes late. Would I be able to find Tewa?

The next morning, Zach and I pulled out of our driveway shortly after 6 a.m. and immediately noticed a slight wobbling in the handling of the vehicle. The problem was a flat tire, which flopped and steamed as we pulled into the nearest gas station. Fortunately, a worker at a nearby tire store not officially open for business agreed to help after polite begging and the brisk waving of a $20 bill.

Because of the delay, we missed the start in Sedona. We decided we could probably meet up with the caravan at Little America in Flagstaff, but high-tailed it up I-17 just to make sure. For reasons not entirely clear, there seemed to be a lot of accidents taking place behind us. We somehow arrived ten minutes ahead of the rest of the group despite a long stretch of thick, milky fog that allowed us less than ten feet of visibility in some spots. We were relieved to see our comrades arrive. 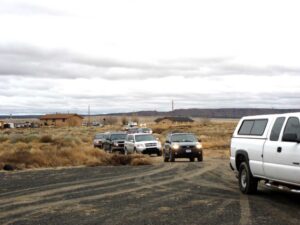 When we finally turned off I-40 at Winslow, we imagined the mesas before us a new frontier to explore. We imagined the response of the Tewa people to our gestures of goodwill. We marveled at the parade of Tewa Holiday cars stretching out across the desert both ahead and behind us in true caravan style.

Pulling into the parking area of the Tewa Community Center, also known as Mud Flats, many of Sedona’s finest dressed dogooders stepped out of their cars and into the brown, yellow swill without batting an eye. We splashed and stomped our way into the center’s big meeting room, which, thanks to a smart pre-arrival team, was the picture of organization.

It was amazing to watch the food and clothes pile up and the cars rise slowly from the ground as they were unloaded. Next, it was time to meet the elders, some of whom shuffled into the room leaning on canes or on shoulders of relatives who showed up to help. The Tewa people were shy but not without humor. It could have been uncomfortable, this transfer of goods that acknowledges one side’s neediness and the other’s abundance, but it wasn’t. Instead, compassion and gratitude combined, joining givers and receivers in a ritual that honored both the spirits of Christ and the Tewa people. 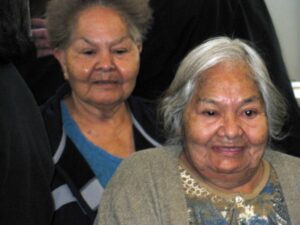 What a pleasure: Delicious Indian fry bread, beans, cheese and vegetables eaten at a long table headed by Mrs. Ruth James, matriarch of the Corn Clan. Light, golden-brown, pastry-like flat bread spread with beans, corn salsa and fresh vegetables made a meal. It made two meals, in fact. Two helpings were required.

Our party included a comfortable mix of James family and friends. Talk was of Tewa Holiday Projects of the past, when the spacious James household could comfortably contain all the travelers from Sedona. We learned what started with fewer than 10 had grown to more than 60 volunteers in the six years since the Crewse family started this tradition. 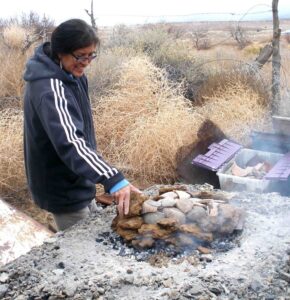 After lunch, a trip to the First Mesa was an adventure into another world that whet the appetite for a return visit to view the petroglyphs and Walpi. Barging into homes of the Hopi people, many in traditional dress, their arts and crafts spread out across a bed or couch in the living area, took some time getting used to, but it was soon obvious they really wanted us there. The economy has been tough on both the Tewa and the Hopi. To them, every purchase made a difference. 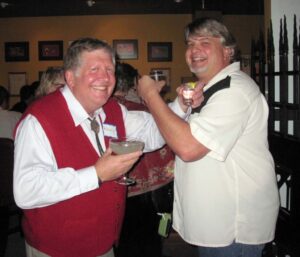 All this would have been enough to make for a perfect Christmas, but there was more. Our Saturday night at La Posada was spent toasting each other with Tequila and enjoying more delicious food. I can’t wait to share this artful, historic hotel with my family.

On reflection, it was heartwarming to hear the thank yous from the Tewa people, but Zach and I felt it was we who owed thanks, to the Tewa people, to our fellow volunteers and to Randy and Milton Crewse, who have a special place saved up for them in heaven. Thanks guys for making Christmas 2010 one of the best holidays we’ve experienced in many years. Greg Ruland